As a lifelong equestrian, Katie has always been more than a little bit horse crazy. She took a riding lesson for her 6th birthday and was immediately hooked!  She was introduced to the sport of dressage when a family friend came to help work with her bratty pony a few years later. Throughout her life, Katie’s love for horses has brought her great joy.  After her diagnosis, they became her lifeline.

In 2015, at 35 years old, Katie was diagnosed with cancer.  A rare, aggressive form soft tissue cancer known as a Clear Cell Sarcoma was growing in her knee.  Amputation of the leg above her knee was the only option to make sure this aggressive cancer was removed. On August 5, 2015 Katie underwent amputation surgery. Although there will always be a high risk of her cancer returning, she is currently living cancer free and thriving as a successful para-equestrian athlete. 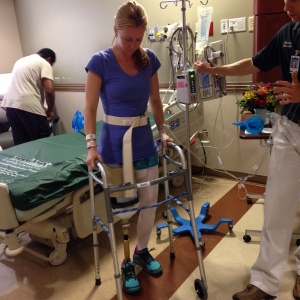 Adapting to her new life as an amputee came with plenty of challenges and daily obstacles to overcome. Katie did not let her disability slow her down. She met each challenge with unbreakable determination and a positive attitude which allowed her to adapt and overcome whatever challenges came her way.

Horses were a very important part of Katie’s recovery. They motivated her to work hard in her physical therapy and rehabilitation so that she would be able to ride again.   Riding and competing on the worlds’ stage in para-equestrian dressage has been her goal from the day she heard her diagnosis.

Katie got back in the saddle again for the first time just three and a half months after her surgery with the help of a therapeutic riding center in Austin, Texas know as H.E.L.P. (Horse Empowered Learning Program of Austin). She regained her balance and confidence in the saddle and began considering opportunities to ride again in her beloved sport of dressage again.  Just six short months after surgery, Katie rode in her first Para-Equestrian Dressage competition.

In her first year of competition, she qualified for the US Para-Equestrian National Championships where she won the 2015 Grade IV Reserve National Champion title and was awarded the United States Equestrian Federation’s Annual Sportsmanship Award Trophy.   She finished her first year of competition ranked as the top para-equestrian rider in her disability grade by the United States Dressage Federation.

The next chapter of Katie’s Para-Equestrian journey began in 2017 as Katie entered international level competition.  Taking this next step in stride, Katie’s success continued. She had the honor of representing Team USA in all four Nation’s Cup competitions, bringing home Gold for the United States.   She finished the year again at the top of the United States Dressage Federation’s Grade V Para-equestrian standings, and also became ranked the #3 in the world on the FEI Para-Dressage Grade V World Rankings List!

In just her second year of international competition, Katie had the honor of representing Team USA for the 2018 World Equestrian Games as the traveling first alternate and was again the USDF Grade V Rider of the Year.

The path to greatness starts with a dream and becomes reality through hard work, dedication, and the support of a great team. Katie is excited and ready for whatever challenges come her way as she continues her journey to becoming a Paralympian.